Unearthing PTSD in BURIED ABOVE GROUND

"What if the worst thing that ever happened to you felt like it was still happening?"

So…I'd wake up every day and still be in junior high?

Teenage trauma humor aside, the question posed above is the tagline to the new documentary Buried Above Ground — and also an amazingly accurate description of the film's topic: post-traumatic stress disorder (PTSD). 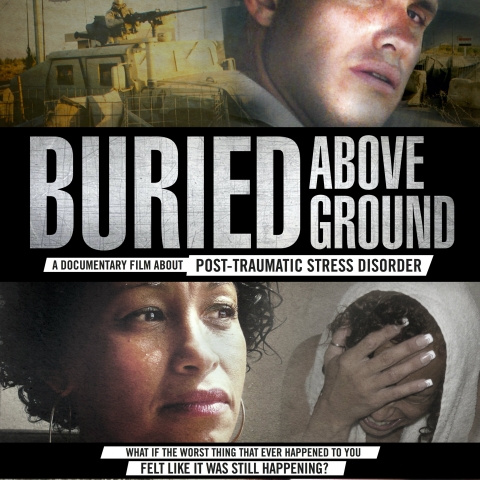 Filmmaker Ben Selkow is the writer, director, and producer behind the feature-length doc, which follows the lives of three individuals over six years, chronicling their daily struggles with PTSD. War veteran Luis, domestic violence survivor Erundina, and Hurricane Katrina evacuee Ashley each fight a daily battle against PTSD in an attempt to regain their previous, pre-trauma peace.

As we've seen in numerous films featured on this blog alone, PTSD is both incredibly common and widely untreated. Scores of veterans and survivors of abuse or natural disaster are left to fend for themselves in a world that seems unnavigable through the filter of intrusive thoughts, flashbacks, and subsequent isolation and depression. Buried Above Ground continues to fight for PTSD awareness in a society that seems blind to the widespread impact of  this condition.

Buried Above Ground has received many impressive accolades for its advocacy, earning praise from such individuals as former First Lady Rosalynn Carter and President/CEO of Mental Health America Paul Gionfriddo. Released in 2015, the film has been featured at multiple film festivals around the country, and screens tonight at the Cleveland International Film Festival.

And just in case you–like me–were curious about the title, Ben Selkow gives an explanation on the film's site:

The title of the documentary comes from a line in English writer William Cowper’s (26 November 1731 – 25 April 1800) poem entitled 'Hatred and vengeance, my eternal portion.' This poem was written in the aftermath of his third suicide attempt. In my mind, the despair he represents in this poem, resonates as the darkest days of someone experiencing the debilitating symptoms of post-traumatic stress disorder (PTSD).

Hatred and vengeance, my eternal portion, Scarce can endure delay of execution,

Wait, with impatient readiness, to seize my

Soul in a moment.

Damned below Judas: more abhorred than he was,

Who for a few pence sold his holy Master.

Man disavows, and Deity disowns me:

Therefore hell keeps her ever hungry mouths all

I'm called, if vanquished, to receive a sentence

Him the vindictive rod of angry justice

Sent quick and howling to the center headlong;

I, fed with judgment, in a fleshly tomb, am

You can learn more about the film and future screenings here.