It’s time to be frank about Frank. 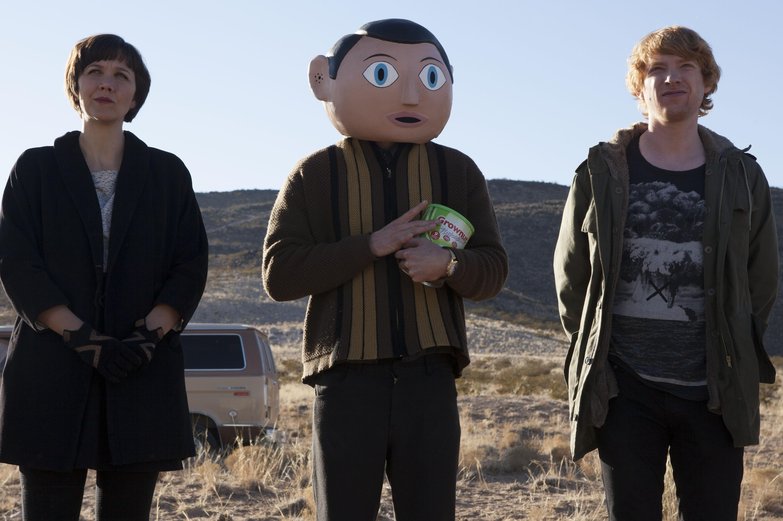 Written by Jon Ronson and Peter Straughan, the offbeat (and, to some, off-putting) new film Frank has been hitting screens at Sundance and SxSW with the story of indie band Soronprfbs, an unusual group of musicians attempting to manage the balance of mainstream success versus staying true to their art. Lenny Abrahamson directs this colorful journey, punctuated most notably by Michael Fassbender as the titular character whose mental condition requires him to wear a large papier-mâché head over his own at all times.

Sound painfully quirky? Well, while it’s hard to overlook the presence of a large, cartoonish head as anything but that, early reviews insist there is more to Frank than a giant paper head. In addition to a humorous study of the intricate interpersonal relationships amongst musicians (or any small group of creative collaborators, for that matter), Frank is being lauded as “an exploration about the nature of mental illness and the lengths we go to in order to hide our own insecurities and inhibitions.”

Let’s take a closer look at what the early reviews have to say about Frank:

“The film is full of great performances yet it is Michael Fassbender as Frank who truly shines in a role that keeps his well-known mug off screen and hidden behind the fake head. The movie treats Frank with incredible empathy, and Fassbender brings Frank to life through an incredible feat of physical acting that gives personality to an expressionless mask. …Director Lenny Abrahamson does a magnificent job of balancing the incredible meta nature of the film (which has scenes at SXSW in Austin) and a deeper exploration of the nature of mental illness and how art can provide a way to work past it. …In the end, Frank is a film that will grab you if for no other reason that a masterful performance from Michael Fassbender who provides an astounding and uplifting portrait of a man haunted by his own mental illness yet freed from those confines through the power of his own musical genius.” – Brandon Worley, Defending Big D

“Whimsy and madness mix for an very unappetizing cocktail indeed in Frank, a gently eccentric account of an avant-garde band whose leader wears a large artificial head with a cartoon face painted on it. Irish director Lenny Abrahamson clearly means to beguile with this weird mix of moods and methods — goofy comedy here, sudden slashes of tragedy there, momentary eruptions of musical inspiration overshadowed by admitted mediocrity — but the mash-up of elements combine with a singularly unpleasant roster of characters to create a work of genuinely off-putting quirkiness. Particularly gullible younger audiences and fringe music fans might synch up with the sensibility here to create a modest cult following, but on any serious level this oddball creation doesn’t cut it.” – Todd McCarthy, The Hollywood Reporter

“And the film also touches upon issues of mental illness, with Doug and Frank having met in a mental institution, and some Asperger’s-like glitches clearly behind Frank’s odd programming. But attempting to figure out exactly what’s wrong with Fassbender’s character is largely missing the point of a movie that celebrates peculiarity. …While some will focus on the conceit of Michael Fassbender wearing a papier-mâché head for much of the film, and some of the odder elements of the movie, you'll likely be too caught up in the deeply inventive, playful and idiosyncratic film to give it much thought. And though some pundits may claim that “Frank” may just be too strange for the average moviegoer, those with at least a working sense of modern day music and the struggles of artists should easily relate and empathize.” – Rodrigo Perez, Indiewire