You've probably seen more than one movie about a young, pregnant teenager.

And they've probably all been on the Lifetime channel.

But here's pregnant teen protagonist you might not be expecting: a 13-year-old Colombian guerrilla fighter hiding her pregnancy in an atmosphere where all female soldiers are forced to have abortions. Making her situation more dire is the fact that she has been tasked with protecting the commander's infant — and oh yeah, the commander is also the father of her unborn child. 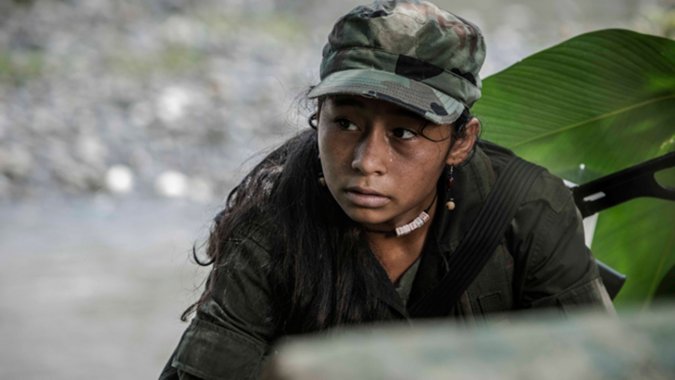 This not-so-Lifetime scenario is the plot of Alias Maria, a new film by director José Luis Rugeles and writer Diego Vivanco that premiered in Colombia last month and at the Cannes Film Festival just last week. The heavy political and military themes underscored by the plight of a very young woman in such an environment makes a strong statement about social issues in Colombia and similar nations, even if Alias Maria is not a perfectly executed effort.

Let's take a look at what the critics are saying about Alias Maria:

"…a despairing drama that works better as a damning societal portrait than a stripped-down character piece. … Without stars or a sexy marketing angle, this drama will need word of mouth and strong reviews to entice prospective buyers, with festival appearances more of a certainty than theatrical engagements. However, advocacy groups could help champion the film." — Tim Grierson, ScreenDaily

"The film is by no means perfect—the situation of military conflict is barely sketched and could use some fleshing out, as could some of the supporting characters assisting María as her fellow-soldiers. Still, there’s a raw power to Rugeles’ vision that’s difficult to shake off, as well as honesty that makes it stand out in the festival onslaught of highly calculated fare. By the end of the story, María is all the stronger for the adversity she fought against and the care she offered to the baby amidst military mayhem. What we are left with is an image of a woman gaining self-knowledge and developing courage in a way that’s often understated but nevertheless powerful. In a word, the movie would make for a perfect double bill with Mad Max: Fury Road." — Michał Oleszczyk, RogerEbert.com

"This second feature from Colombian director Jose Luis Rugeles (Garcia) bows in the Un Certain Regard section of the Cannes Film Festival and its unusual angle on the ongoing war in Colombia is certainly worthy of attention. But the filmmaker’s tendency to pare back his narrative to its barest essentials makes it very hard to identify with anyone, with all of the characters despondent archetypes rather than real people. Other festivals will want to take a look though it’s unlikely this’ll have much of a theatrical career beyond Spanish-speaking territories." — Boyd van Hoeij, The Hollywood Reporter

"A sobering social-issue movie set in a milieu so different from our own that it practically feels like science fiction, Jose Luis Rugeles’ Alias Maria embeds audiences among a group of Colombian guerrillas, where children are forced to fight alongside adults, and where the young ladies in the group are used for sexual recreation, but forbidden to bear children. Stories like this can be arduous to watch, and here, the unease is amplified by long, dialogue-free passages in which a small squad of fighters — including teenage Maria, who protects an obvious secret — find time to reevaluate their allegiances while undertaking a dangerous mission. The movie itself falls short of its objective, failing to engage as a straightforward thriller, but represents the iceberg-tip of a far larger effort, a grass-roots re-educational campaign the sheer importance of which should land Alias Maria countless more fest berths after Cannes."  — Peter Debruge, Variety