Review Round-Up: A Light Beneath Their Feet

Quick: what's your favorite film about a mother-daughter relationship?

My answer will never change.

It's certainly tempting for filmmakers to dramatize the more…volatile elements of the mother-daughter relationship, which can, indeed, have its ups and downs. But in director Valerie Weiss's recently released A Light Beneath Their Feet, high dramatics are cast aside in favor of a realistic and heart-wrenching portrayal of the beautifully flawed bond between mother and daughter. 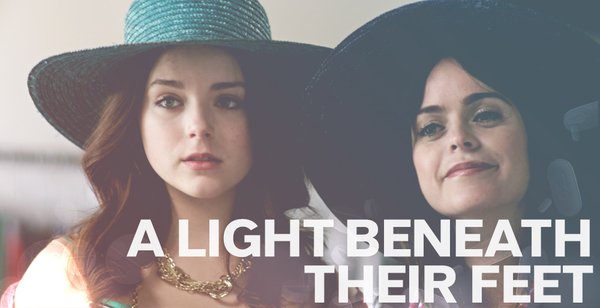 A Light Beneath Their Feet centers on the life of high school senior Beth (Madison Davenport), whose life is full of the typical teen challenges, with the added pressure of the relationship with her mother, Gloria (Taryn Manning). Gloria–who had Beth at a very young age–struggles with bipolar disorder, and her marriage to Beth's father ended because of it. Now leaving childhood behind and lured away by the promise of her own adult life, Beth must face the challenges of what it will mean to leave Gloria, who sees Beth as her greatest comfort. Audience members who have been the main (if only) support system for someone living with a challenging mental illness with recognize the heartache of Beth's situation, especially as a young adult eager to explore a life of her own.

Let's take a look at what the critics have to say about A Light Beneath Their Feet:

"Rarely have the dynamics of a loving yet unhealthy relationship been explored with as much tenderness and insight as they are here by Weiss and screenwriter Moira McMahon. The deep and abiding love between mother and daughter is never in doubt, and since Gloria had Beth at a young age, there are moments when the two women resemble twins, particularly in the exquisite shot where they regard their reflections at a clothing shop. … What Gloria doesn’t realize is that she must be on her meds for nobody but herself if she truly wants to get better. Beth cannot fix her, she can only love her, and love isn’t enough.

"Manning wisely resists any semblance of caricature or crowd-pleasing quirkiness in her portrayal of the character’s manic state. Gloria’s failed attempts at appearing stable while toiling away as a lunch lady, greeting students with overenthusiastic zeal, is painful to watch. She nails the impulsiveness and restlessness that people with bipolar disorder experience, as well as the vacancy in their expressions when their minds are clouded by the haze of illness. Sometimes all you can do as a caregiver is wrap yourself around the person to prevent him (or, in this case, her) from harming himself, and that is precisely what Beth does during an especially frightening episode."

"Screenwriter Moira McMahon Leeper perhaps injects a few too many plot elements into the mix, including Gloria's unwittingly and disastrously going off her meds due to another character's machinations. And the romance between the two emotionally scarred teens, which includes a tender prom scene, feels all too familiar. The film's strength lies in its honest and realistic portrayal of mental illness and the toll it exacts on those in its sufferer's orbit.

"Director Weiss and cinematographer Jeffrey Waldon use subtle visual techniques to convey the main characters' fragile emotional states and deep interconnectedness. But the technical aspects pale in comparison to the superb performances by the underplaying Manning, who makes Gloria likable even at her most desperately needy, and Davenport, who beautifully conveys Beth's contradictory impulses to sacrifice her own needs to care for her mother or leave home and forge a path for herself."

A Light Beneath Their Feet opened in wide release on May 6th. Have you seen it? Leave us your thoughts in the comments!