Most of us have developed an understandable hatred of cliches, but you can't deny the powerful validity of the old phrase "truth is stranger than fiction." 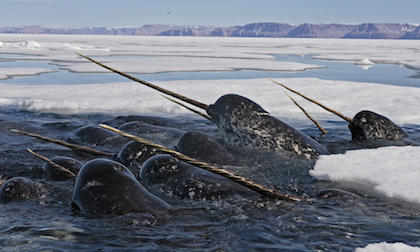 For example, I am still regularly horrified that the narwhal exists.

Documentaries are particularly effective in bringing us the almost unbelievable stories unfolding in the world around us, and filmmaker Nick Broomfield is one of the industry's best. He's brought forth compelling work with Aileen Wuornos: Portrait of a Serial Killer, and Biggie and Tupac (just two of his many credits), and he is in the spotlight once again with his latest film, Tales of the Grim Sleeper, an investigation into the case of the serial killer who terrorized South Central Los Angeles for twenty-five years, and who–according to authorities–murdered over one hundred women.

If you've never heard of the Grim Sleeper, you're not alone. Unlike the Boston Strangler or the Zodiac Killer, the Grim Sleeper's serial killer moniker was not necessarily a household name. And if you don't recognize the Grim Sleeper, then you definitely won't recognize Lonnie Franklin, Jr. — the man who was arrested in 2010 as the culprit behind the murders. Solving the puzzle of the Grim Sleeper's absent notoriety is easy, especially according to Broomfield: the killer was targeting only young black women, and the loss of black life was not enough to earn a persistent presence on TV news…or on the desks of the LAPD. Twenty years of murders passed before the cops arrested Franklin, and even with their suspect behind bars, the case of the Grim Sleeper has gone mostly cold, with many murders unaccounted for, and with the police at a loss to explain them.

This is where Broomfield comes in: with the help of a former prostitute named Pam, the filmmaker takes to the streets of South Central Los Angeles to unearth information about the Grim Sleeper. Along the way, he discovers that a citizens' group, the Black Coalition Fighting Black Serial Murders, had been formed in the 1980s as a direct response to the LAPD's inaction on the case. Broomfield focuses sharply on the issues of race and class as they determine how people and the authorities react to and mourn murders in the United States.  Reviewers are applauding the film, noting how Broomfield exposes "a social strata that has largely been left to fend for itself, failed by institutions of law, education, and job opportunity" through a film that "builds to a powerful assemblage of testimony conveying a grave injustice that extends well beyond this case."

A timely echo of the recent events in Ferguson, MO, Tales of the Grim Sleeper received a premiere at the recent Toronto International Film Festival. HBO Documentary Films has secured the rights to the film.