What would the horror genre be without its beloved, tried-and-true conventions?

The FX channel’s highly popular series American Horror Story took full advantage of those conventions in its premiere season last year, rounding out the typical tale of “Normal family meets ridiculously haunted house” with a whole host of restless spirits who drove their living counterparts to their eventual…well, let’s stop there to avoid spoilers. This year, the series returned with an entirely new cast of characters and revamped storyline; now American Horror Story: Asylum, this season’s deviant creepshow takes place within the walls of Briarcliff, a 1960s mental hospital. 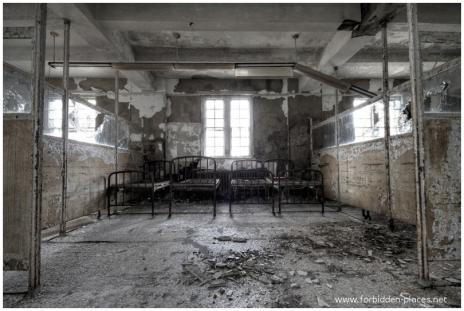 I can’t imagine why. They’re just so dang cheery.

While the show has made a name for itself by pushing the boundaries of horror and camp on cable TV, the fact that season two has been set against the backdrop of a mental institution introduces the possibility that the show has crossed the line from entertainment to stigmatization when it comes to the portrayal of the mentally ill. Indeed, scenes of Briarcliff patients gathered in the dreary common room almost always feature individuals banging their heads against the wall, arguing with invisible counterparts, and, uh, vigorously self-pleasuring. Not exactly an accurate (or flattering) portrayal of mentally ill individuals. But then again, American Horror Story and its characters most definitely aren’t striving for reality, so is it fair to accuse the show of stigma when it’s just flexing artistic license?

A recent entry on the National Alliance on Mental Illness blog explores the possible stigma reinforced by American Horror Story:

So, is the show stigmatizing? On the whole, it seems so over-the-top that viewers, even in the mental health community, might have trouble taking it seriously. Furthermore, from a consumer standpoint, the patients appear to be the least troubled occupants of the facility. However, the imagery and scenes might be traumatic to anyone who has ever been abused, neglected by the mental health system. … American Horror Story has an intentionally improbable plot on many levels. While it can strike a nerve with anyone who has been hospitalized or knows someone who has, especially in past decades, it is almost a spoof of life 50 years ago. Even so, it will be nice when psychiatry, even with all its faults, is no longer used as a symbol for all that is wrong in society.

Many of the comments of the post echo the sentiment that using mental hospitals and mental patients as horror movie fodder only serves to cast a negative (and shameful) light:

The images are destructive even if not real. They add to popular culture where mental hospital people are associated with violence and horror and people are afraid of treatment so they don't get any. But ECT works. Medicine works. The show sounds like Scientology. It's stigma.

AHS:Asylum isn't the worst thing I've ever seen, but in the grand scheme of media and mental health, it's not what we need right now.

…it is always frustrating to feel like we’re all being put on display for America’s amusement. I’m tired of mental illness equaling scary unknown possibly live threatening individuals. I have a hard enough time trying to get my family to understand without this kind of crap interfering.

Bottom line: with the effective time-honored conventions of creepy children, staticky televisions, and teenagers making out in abandoned lakeside cottages with a madman on the loose, maybe the industry can take it easy on the mental hospital theme. 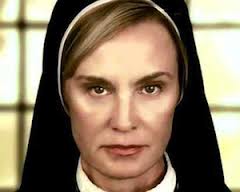 Keep Jessica Lange, though. Girlfriend is TEARING. IT. UP.